You don't pay if you don't like the product

Aloe, whose Arabic name ‘saber’ symbolizes patience, is used in many cultures for different purposes. The first documented use of aloe was from the ancient Egyptians. Around 1500 B.C., the Egyptians recorded use of the herbal plant in treating burns, infections and parasites. The Mahometans hung aloe over their doorway in order to protect the residents inside. Also known as ‘lily of the desert’ and ‘the plant of immortality’, historical evidence shows that the aloe plant emerged in the warm, dry climates of Africa. This plant grows approximately two feet high and is composed of long, spiky, thick, lance-shaped, green leaves which bloom in a rosette shape and flourish in warm environments. The leaves, which hold the majority of the desired product, can grow up to eighteen inches high and two inches wide.

Aloe is thought to heal epithelial tissue, which is defined as a layer of cells, which covers the body. Skin, therefore, is the body’s largest organ and is most benefited by the healing properties of aloe. Aloe is well reputed for the medicinal value of the sap found within its leaves. This sap, a thick, mucilaginous gel, is made up of a variety of amino acids, primarily alanine. The predominant properties of aloe are a result of the activity of amino acids on the skin. When topically applied, the gel that is contained within the leaves of the aloe plant has traditionally been shown to accelerate wound-healing time and alleviate burns. It also helps to lessen the risk of infection during the healing process. Worldwide, many civilizations such as the Greek, Roman, Persian, Indian, Japanese, and Russian, extolled the medicinal uses of aloe. When taken internally, this plant has been used for centuries for treating stomach disorders, kidney ailments and hyperglycemia. Aloe gel has also been used to treat a variety of skin conditions such as eczema, psoriasis, allergic reactions and insect bites.

The cuticle, which covers all parts of the plant, is able to absorb moisture easily while preventing its rapid evaporation. If a leaf became separated from the parent plant, it can be laid in the sun for weeks without becoming completely shriveled. Even when dried out from heat exposure, it will, if submerged in water, become plump and fresh in a few hours. This succulent plant is able to hold substantial amounts of water in its leaves, keeping the plant hydrated and its water requirement low. This feature helps it to survive in warm climates and is also beneficial with regards to skin hydration.

Aloe is able to moisturize the skin by bringing oxygen to the surface and increasing the synthesis as well as the strength of the skin tissue. Aloe improves the skin’s ability to hydrate itself, aids in the removal of dead skin cells and has an effective penetrating ability which all contribute to create an overall healthy aesthetic. Aloe vera gel is a water-soluble powder which when added to formulations brings with all of the benefits of aloe. Skin will be soothed and hydrated, giving a moisturized, supple appearance the user.

The above information is for general research purposes only and is not a representation or warranty of any kind. This material is not intended to diagnose, treat, cure or prevent any disease. The user of this material is solely responsible for determining fitness for any particular use; requesting and reviewing the applicable Material Safety Data Sheet; and compliance with all applicable laws and regulations. Terms and conditions apply

Let us know what you think...

What others are saying

Continue as a Guest

Continue as a Guest 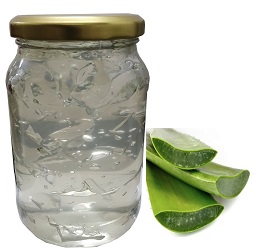